skip to main | skip to sidebar

- Syd used a Zippo lighter as a slide tool, Wah pedal can be heard in MArk Lenard's video on ambient light, the pink floyd are briefly featured.
- Octave Pedal from Roger Mayer ( rumoured ... )
- Home made Fuzz ( who knows where this came from ... )

So you've decided you were going to give See Emily Play a roll with the guys in that good'ol Garage Band, you guys put that vinyl on, and blasting through is that insuferable riff like sliding a rusty flute down a fretboard ... your sweating already, and then that proto-metal intro kicks in ... phew you say ... this might just be a stroll down the park ...

25 minutes later as you walk into the neighborhood guitar center, you're going straight towards the Telecaster section ...

What Gilmour does : Gilmour has been pretty respectful of Syd's stuff and has sung the songs at several occasions live, his '' Syd Setup '' is mainly a run of the mill Telecaster, although he has recently been using a custom shop model which looks oddly close to a late 50's Telecaster. NOTE : Gilmour uses Seymour duncan pickups on most of his Telecaster gear.

What I do : Telecaster Vintage'54 Bridge Pickup in any Telecaster I can grab, it gives me that harsh, straight Treble repsonse I need to cut through the mix ala Astronomy Domine, the standard Tele- pickups don't quite live to the expectations you'd have to get that vintage sound.
I STRONGLY recommend the Fender Vintage noiseless series pickups, NO HUM is the way to go with vintage tone :

Fender's Classic series offers an afforable Tele tone for a '' quick '' fix, the neck is awesome and feel is great. and it WILL sound like a Telecasterish equivalent ...

Parker Southern Fly - this Southern Bell just blew my socks off ... If a Telecaster could combine the acoustic beauty of some Martin Guitars with the twang and snarl of some Telecasters ... this would be it ... this guitar is for people that want a Telecaster's evolution into something unbelievably playable and fun. I honnestly honnestly believe that if Syd was still alive and playing ... he'd play this. expensive at close to 1500 $
Posted by Oren Weizman at 9:24 AM No comments:

In the mid 60's wether at the UFO or just jamming away in some studio putting the finishing touches on Emily plays, Syd is making quite extensive use of a Danelectro Double cutaway twin pickup guitar, that guitar is known as the : DC - ( although ti has a particular series number that starts with a 3 )
While some in the business call it a poor man's Tele, there is alot more about it than most assume, behind those famed lipstick pickups, a body of Masonite ( for the curious ) and poplar wood and a Vinyl/plastic covering.
The Danelectro's pickups were wound in series which contributed tremendously to the warm sound we associate them with. The concept is an alnico bar wrapped in coil and plucked into a ''spare '' lipstick chrome cover ... hey whatever floats your boat ...
Syd used it extensively during his earlier gigs, but It was eventually subplanted by the mirroresque Esquire

Excellent tone, for ridiculously cheap price, neck is a darling to play and the new PRO series is another beautiful addition to the Danelectro line, DON'T short change any of the Danelectro stuff wether pedals or guitars, they are starting to gt some serious street cred !
Posted by Oren Weizman at 8:40 AM No comments: It had the particularity of being able to cover Guitar and Bass ... a british Amplifier, warm tone, stays clean and lean, but can have cutting sharps - Many descriptions say the Selmer meets you halfway between a Vox and a Marshall Amp !

Although it's a great mix of Vintage tone fr tube amps ( and some of them even come cheaper than those sound city amplifiers ) the Selmer is not an AMp with a reputation for great reliability , parts are hard to come by and these amps are known to '' buzz '' up on occasion, I would never put anything more than 300 $ USD on one of them ... be VERY careful if you are interested in a Selmer amp, although they cover both Bass and Guitar, they don't do either particluarily brilliantly
Posted by Oren Weizman at 10:59 AM 2 comments: 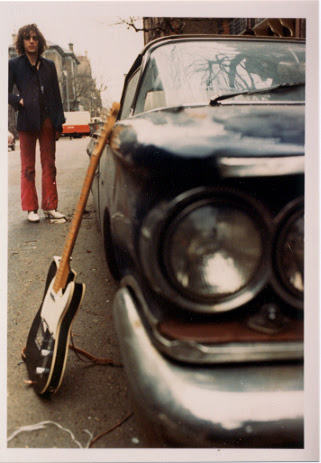 Undoubtedly a mysterious instrument to figure out ! Black Bound body, brass saddles, a bright tone with a Maple Neck that sports a '' CBS '' logo on it ! not very much about it is know besides the fact Barrett trotted it around from place to place. in certain interviews he doesn't seem to show much adoration for it saying it needed '' replacing '' whatever that meant ...
The guitar is an integral part of the Madcap laugh sessions ( who were recorded with David Gilmour's amplifiers ) and is splattered all over Mick Rock's photo sessions with Syd, one would place it as a Custom Telecaster ranging all the way from 1967 to 1969 ... who knows ...

A Telecaster is always a great guitar, although this Telecaster is guaranteed impossible to find, alot of people will love the twangy loud sound these guitars produce, the closest to Syd's guitar would be a 60's Telecaster from the Fender classic series, this will put you in MCL territory without too much trouble. the total cost of assembling a '' Barrett '' caster is around 700 $ with the right neck and double bound body.
Posted by Oren Weizman at 10:53 AM No comments:

Most guitarists start their musical career on piano. But not Syd Barrett. He launched out on a banjo. 'I'm not quite sure why,' he says, 'it just seemed a good idea at the time. I picked it up in a second-hand shop and plunked away quite happily for about six months. Then I decided to get a guitar. The first one was a #12 Hofner acoustic which I kept for a year. Then I joined a local Cambridge group called Geoff Mott and the Mottos and splashed out on a Futurama 2. At the time I thought it was the end in guitars. Fantastic design and all that. Incidentally, Geoff Mott was a great singer.... wonder what happened to him?

'We did a lot of work at private parties. And some of out material was original, but mostly we stuck to Shadows' instrumentals and a few American songs. 'Eventually the group dissolved and I moved into the blues field, this time playing bass. It was another Hofner, and I played that for a couple of years. One day I met a guy guy called Roger Waters who suggested that when I come up to a London Art School we got together and formed a group. This I did, and became a member of the 'Abdabs. I had to buy another guitar because Roger played bass, a Rickenbacker, and we didn't want a group with two bass players.

'So I changed guitars, and we started doing the pub scene. During that period we kept changing the name until we ended up with the Pink Floyd. I'm not sure who suggested it or why, but it stuck. A couple of months ago, I spashed out a couple of hundred on a new guitar, but I still seem to use that first one. (Julien's note: The guitar was Syd's famed Fender Esquire Telecaster) It's been painted several times, and once I even covered it in plastic sheeting and silver discs. Those discs are still on the guitar, but they tend to look a bit worn. I haven't changed anything on it, except that I occasionally adjust the pickups when I need a different sound.

'Who are my idols? Well, Steve Cropper is an obvious choice, and so is Bo Diddley. In the old days, he was a great influence on both me and the group. No, I don't think they influence me now. At least, I'm not conscious of it. Apart from being a good guitarist, I don't really have any ambitions.... yet! I haven't been in the business that long' 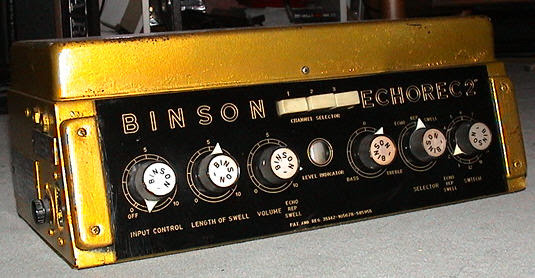 what makes an Echorec original, special, warm etc ... is the fact it will color your tone to death ...
Why you may ask ? because the machine is an oil filled Echo monster that swells and oozes analog Echo !
How does it work you may ask ?

Well .. it's hard to explain in layman's terms but here is my attempt. At the core of the Echorec is a ''' wheel '' of sorts, a disc of other sorts ! who acts as an ancient '' Hard Drive '' with at it's periphery a set of '' heads '' that transmitted the sound and repeated it at different lengths depending on their placement. the Echorec had the particularity of swell controllers which gave the Echo that specific '' blurble '' of a tone.
The Echorec was a spectacularly sounding device as can be heard on tracks like Interstellar overdrive and Astronomy Domine, it's interesting to note that rumours had Syd Barrett placing 2 different Echorecs in 2 different Amps to have a more 360 degree sound ! but who knows ... Rumours, Rumours ...

Another rumoured Echo Machine was the WEM Copicat, an Echo box that utlized tape and had alot of warmth to it ! 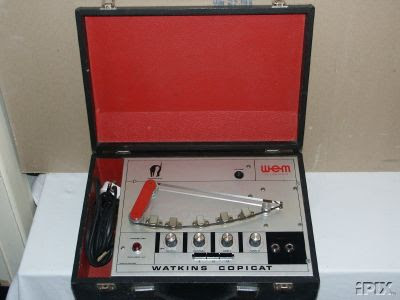 Don'T waste your time on old unreliable echo boxes, although they sound unique and warm, there are pedals out there right now who quite simply make these pedals sound like a sick dog, recently I came across the T-Rex Replica, who although quite expensive is an absolutely gorgeous delay paddle for a third the price of an Echorec, did I mention it doesn't leak oil, crack, pop and need tube replacing ? Those echo boxes were great ! but for the cost and maintenance, go buy yourself that Custom Shop Esquire you've been dreaming about !
Posted by Oren Weizman at 10:22 AM No comments: